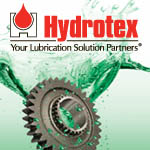 Prior to 2008, this North Carolina facility had been experiencing system performance concerns on their hot oil embossing process. Besides uneven heat distribution, there were concerns due to leaking seals and the toxic nature of their HTO fluid. Worker safety concerns had mandated multiple production shutdowns due to leaking fluid.

After reviewing all the parameters and customer goals, the Hydrotex® Technical Team developed a program to effectively remove all of the oil, flush and refill the system in order to bring it up to operating conditions over a three day weekend.

Hydrotex HTS Flush dissolved heavy carbon deposits in the system without concern of dislodging hard deposits and damaging the pump. The customer observed that the supply pressures were higher and they now experience improved production efficiency on the hot oil embosser due to even heat distribution across the entire length of the unit. After three years, oil analysis confirms that the Hydrotex HTO maintains optimal performance. The percentage of production seconds from the hot oil embosser have been greatly reduced which has led to a significant savings and increased production efficiencies.

This facility was also experiencing excessive bearing failures due to mixing incompatible greases and applying greases that were not fit for the application. After reviewing all the requirements, it was decided to condense the number of greases plant-wide from seven to two compatible greases. In addition, a color coding system was established to differentiate greases.

Cross contamination concerns and application mistakes have since disappeared. As a result, bearing failures are now almost non-existent. Inventory control has improved and grease usage has decreased due to switching to superior performing grease and establishing lubrication management processes.

This store is currently under construction. Excuse the dust... Dismiss